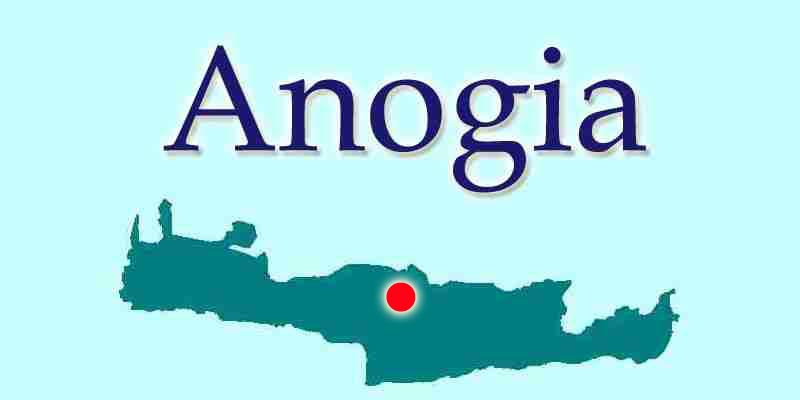 Anogia (alternative spelling Anoghia, Anoyia) is an authentic mountain village in the Rethymnon district of the Greek Island of Crete.

The village has had somewhat of a turbulent and tragic history. Anogia took part in all of Crete's struggles for liberation particularly rising up against the Turks and their occupation of the Island and later against the German occupation in World War Two.

The village was a major centre for the resistance movement and in 1944 resistance fighters kept the kidnapped German General Von Kreipe prisoner here before smuggling him into Africa. In retaliation the Germans ordered the total destruction of the village. The German forces shot dead the men folk of the village and razed every building to the ground, except for the church. The widows of those massacred men later developed their weaving industry to support themselves.

The resilient Cretans rebuilt the village and now it stands as a testament to those brave men and women who fought against their oppressors. Winston Churchill, when hearing of the Islander's bravery during and after the Battle of Crete, said:

"...the world will no longer say that Greeks fight as heroes, but heroes fight as Greeks".

You can easily get to Anogia from either Rethymnon and Heraklion bus stations. Anogia is located on the border of the prefectures of Chania and Heraklion and nestles almost 750 metres at the base of the northern slopes of the Idi mountain range in central Crete with Mount Psiloritis as the highest mountain in Crete dominating the landscape.

Anogia is one of the major Folk Art and creative crafts centres on Crete. You can visit the Folklore Art Museum as well as watch demonstrations of weaving and the art of glass manufacturing.

Anogia also has a great musical tradition and it is the birthplace of great artists like Nikos Xilouris, Psarantonis and Vasilis Skoulas. Traditional Cretan music can be enjoyed at the village in the concerts which are held in the open theatre "Nikos Ksilouris" during the summer, as well as in festivals which take place on religious feast days.

The area around Anogia is wonderful for walking, hiking and cycling. The E4 Path, which is the long distance walking route throughout Europe, goes through Anogia.

Sights to explore around the area include the breath taking Nida Plateau and the Ideon caves. Nida Plateau is one of the largest and most secluded plateau on the island, and without doubt the most beautiful. Try to see it in all its fabulous glory in springtime, covered with colourful wild flowers of Crete. The Ideon Andron is 24 km from the village of Anogia. The cave in which Zeus was raised according to ancient Greek mythology, represented an important place of worship in both the Minoan and the Roman period. The excavation works that were carried out in the interior of the cave revealed an abundance of important finds such as ceramics, gold jewellery, metal objects and of course the famous bronze shields. Also, many archaeological sites are within easy reach including Tilissos and Sklavokambos. The archaeological finds are on display in the magnificent Heraklion Archaeological Museum.

If you decide to stay in the village there are a small number of rooms to rent including the small Hotel Aristea.

If you love Crete then you'll love the romantic Greek island of Santorini.

Visit our sister site of Simply Santorini for all you'll need to know about Santorini.