Ancient Aptera, a Hidden Gem Steeped in History and Myth...

It is said that the Sirens were urged by the Goddess Hera to challenge the Muses in a singing contest, but this contest they lost.

In victory, the Muses plucked the Sirens of their feathers and wore them as a trophy.

With their feathers plucked the Sirens were no longer able to fly and turned half of their body into a fish tail.

Thus, some believe, is how the ancient City of Aptera got its name – in tribute to that famous episode from Greece’s Mythical past, for an animal is aptère when it is devoid of wings. 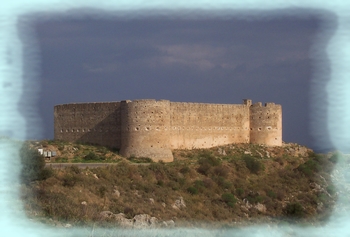 Wings would be needed to cast yourself from the magnificent Turkish Fort which occupies a commanding view of Souda Bay, high up on a ridge just a short chariot ride from the amazing ancient City State of Aptera.

Some, less romantic than we, suggest that the name derived from Ptera, the king who first founded the city!

Overshadowed by more famous sites at Knossos, the former city state of Aptera near Kalives is not yet on the tourist route and so can be investigated in relative peace. Perched 230 metres up on a hill overlooking Souda Bay with panoramic views of the whole plain of Chania.

The site is well marked off the new road about 15km from Chania and near to the beach resort and fishing village at Kalyves. Somewhat overshadowed by Minoan Knossos at Heraklion, you can explore without the crowds normally associated with such sites, even in the height of the tourist season. 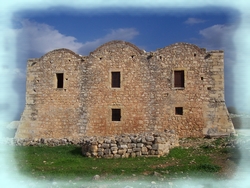 We stumbled on the amazing place without knowing much about it. We fist went in November and were the only visitors. A solitary chap sat vigil in the cabin at the entrance, staring moodily across the plain over which the site looks. He didn’t seem to mind the peace and solitude and cheerily told us that the entrance was free.

Aptera was once one of the most important city-states in the whole of Crete and was actually totally autonomous from around the 6th - 4th century BC, minting its own coins.

It sent soldiers to aid the Spartans during the 2nd Messenian War (668 BC) and was later an ally of Knossos during the Cretan civil war in 220 BC.

It had two harbours. The first is believed to be at Minoa at the north entrance to Souda Bay, where Marathi beach can be found today. The second is thought to be at either Kalami or Kalyves.

Aptera continued to be an important city during the Roman and first Byzantine periods but the Arabs destroyed it in 823 AD. The Venetians built a fort there but this was destroyed by the pirate Barbarossa. The city was also badly hit by an earthquake in the 7th century AD and eventually abandoned.

In 1942 the site was excavated by the Germans who were in occupation of Crete. More excavations were carried out in 1986-87 and in 1992-95, and systematic work continues today.

This sight is remarkably well preserved and there’s still a lot to be discovered. It is well worth a visit and we found it at least as interesting and spectacular as Knossos. 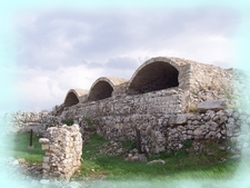 The city walls are still standing, and you can also find remains of a small Temple of Demeter built around 100 BC. There’s a small Roman theatre and baths and most spectacular of all are three enormous vaulted cisterns from the time of the Roman occupation.

Three arched vaults enclose a huge cistern that held water to feed the Roman baths that cover the site. You can enter the cistern system through a small doorway to view the central chambers. We went in and were confronted with the eerie sound of pigeons’ laboured wing beats echoing round as we disturbed a flock roosting in the high vast ceilings. 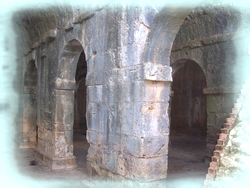 Leaving the site, you can veer off to the right and take the gently curving road to the impressive Turkish Fort, built around the end of the 19th Century.

The Fort is very impressive and holds a commanding view of Souda Bay and the surrounding plain. It’s certainly a spot where I’d have built my fort!