December in Crete is far less commercially concerned with the build up to Christmas than in the UK or other European countries.

In fact you would not know that Christmas is approaching in Crete in December until very late in the month as Christmas is not celebrated on too big a scale. Other than the life size nativity scenes that can be found in the villages and towns of Crete.

Easter instead is the main holiday in Crete and Greece in general.

Visitor numbers to Crete are very low in the month of December and because of this a lot of the hotels, bars and restaurants are closed during this time.

Weather for December in Crete

December weather in Crete can see falling temperatures, increased rainfall but still plenty of sunshine. The sea temperatures are cooler now but some people still swim each day throughout December.

Temperatures can vary from a low 10°C to a high 17°C with an average of 14°C. Night-time temperatures can plummet quite considerably and blankets or duvets are needed.

Rainfall can be a feature of the December weather in Crete with the probability of few days of torrential rainfall during the month. Strong winds and dramatic storms can also feature during the month of December in Crete. But the rainy days can be interspersed with blue sky and sunny days.

We’ve found that in December the weather in Crete can average about 3 or 4 clear blue sky and sunny days per week with very pleasant temperatures allowing for a thin jacket or cardigan rather than a heavy winter coat.

Flights to Crete in December

Hotels in Crete in December

Visitors to Crete in December may not have as much choice in accommodation and hotels as many of the resort hotels are not open. There are some hotels open in December in Crete, particularly in the main towns of Chania, Heraklion, Rethymnon, Aghios Nikolaos and Sitia but you may have to search long and hard to find hotels in the holiday resorts.

Things to do in Crete in December 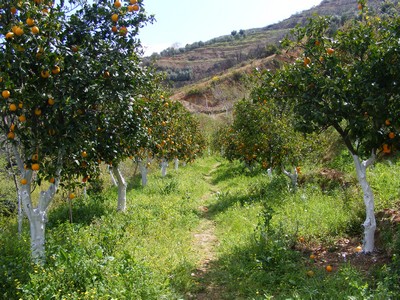 The orange groves brighten the landscape of December in Crete as the oranges, grapefruits, mandarins and lemons ripen on the trees and are just about ready to enjoy.

Snow begins to appear and deepen on the mountains of Crete throughout December.  This makes for a very picturesque landscape with a bright sunny, blue sky day still very much in evidence in December in Crete.

Visiting the museums of Crete can also be great in December in Crete. The major towns of Heraklion, Chania, Rethymnon and Aghios Nikolaos all have fantastic archaeological museums featuring Minoan artefacts and other finds from the Roman era.

Although Christmas is not as big, brash and bauble laden in Crete than other places, New Years Eve celebrated on December 31st is a different story. Children collect money and sweets from people by visiting door to door and ringing out a tune on small metal triangles. The children are expectantly awaiting their Christmas presents from Saint Basil (Aghios Vassilis) whose feast day is celebrated on the 1st of January.

It is a tradition in Crete and Greece to make a wager on New Year's Eve because it is thought to be very lucky, so the betting shops can get very busy. Special bread and cakes are made to celebrate the New Year and firecrackers and fireworks are lit as midnight approaches.