Heraklion – an important port and point of entry for many visitors to Crete...

Sometimes spelt as Heraklio, Iraklion or Iraklio! the capital of Crete lies centrally on the north coast of the Greek Island of Crete in the Prefecture of Heraklion. It has a nice international airport, named after the writer Nikos Kazantzakis.

Heraklion is for many the gateway to the Greek island of Crete. It's here most will fly or sail to.

It's here at these resorts east of the Town you'll find some of Crete's best beaches, which are included in our Best Beaches Guide.

Heraklion has it's own attractions though, and is certainly worth a visit during your stay on Crete.

Getting there and getting around

The major players are:

The Greek airlines fly regularly to Heraklion from Athens:

There exists other Itineraries from many European cities both scheduled and chartered services. Check out our Flights to Crete page.

The brilliant and cheap Crete bus service, KTEL, connects the town with many of the villages and towns of eastern Crete and there's a local bus service which will take you around the Town and out to Knossos, for example.

In recent times a lot of effort has gone into making Heraklion a pleasant place for people, whether drivers or pedestrians.

Large car parks have been set up on the outskirts of the town and there have been some efforts to pedestrianise certain streets in the town centre.

THE VENETIAN FORTRESS OR KOULES

Look out for the Koules at the fishing harbour near the modern port. As you can imagine, this formidable Venetian fortress helped protect the ancient city from invaders and sets off the great city walls, among the longest in Europe, helping to provide an impressive and effective defence.

Off the coast and to the north is the small island of Dia. Here it was that famed nautical explorer Jacques Cousteau found evidence of ancient Minoan settlements. You can book trips to the island of Dia at travel shops in the town and near the harbour.

The Loggia is a fantastic example of Venetian architecture and is a 16th Century building with semi-circular arches, decorated with trophies and coats of arms. It was awarded the Europa Nostra First Prize in 1987 for being the best preserved and renovated monument in Europe for that year.

St. Mark's Basilica, almost next door to the Loggia, is now the Municipal Art Gallery and is often used for public art and crafts exhibitions. Built in 1239 in the spectacularly named Square of Blades (Piazza delle Biade), it was once Crete's Cathedral.

Lion's Square is the heart of Heraklion. The decorated fountain in the centre of the square comprises eight cisterns and is decorated with stone figures from Greek mythology, including nymphs, tritons, and monsters, together with a less fantastical creature, namely dolphins!

No square named Lion's Square would be worth it's salt without some lions, and here you'll find four of them, supporting the main basin of the fountain with their heads.

After soaking up the atmosphere and dunking your head in the water on a hot day, you can set yourself down in one of the eateries around the Square. Enjoy the bougatsas, or vanilla cream pies, or have a crepe or a savoury souvlaki, if that takes your fancy.

After your rest, you can walk down Handakos Street for shopping – it's closed to traffic so you can window shop in peace.

In recent times a lot of effort has gone into making Heraklion a pleasant place for people, whether drivers or pedestrians.

Large car parks have been set up on the outskirts of the town and there have been some efforts to pedestrianise certain streets in the town centre.

You'll see that here's a few streets named after numbers running off the square. Not like in New York though. These streets are named after dates of significance.

Look out for the Market that runs along 1866 Street (Odos 1866), commemorating the date of a Cretan Uprising, probably against the Turks.

The market has a long history and sells many Cretan local products as well as socks and shirts too! As always in a Cretan Market, look out for thyme honey, cheese, and (Graham's favourite) raki!

The side streets off 1866 are a good place to find small eateries such as cafes, ouzeries and fish tavernas – excellent, simple food well priced.

The town is close to the ruins of the palace of Knossos, which in Minoan times was the biggest centre of population on Crete. It has been assumed that there was a port here as long ago as 2000 BC, and today it remains an important shipping port and ferry dock. 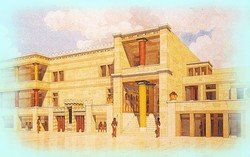 AN ARTIST'S IMPRESSION OF THE MINOAN PALACE AT KNOSSOS

As the most popular tourist attraction on the Greek island of Crete, a visit to Knossos is a must. The imposing Palace of King Minos in Knossos lies just 5km from Iraklion. The site itself includes the Palace of Knossos, The Minoan Houses, the Little Palace, the Royal Villa, the villa Dionysos with famous Roman mosaics, the south Royal Temple – Tomb and the Caravanserai.

Found in the town centre of Heraklion the Archaeological Museum is a definite must see for all who are interested in Minoan art and culture. It is one the great museums of Greece and certainly the most important institution housing Minoan artifacts for all the world.

It houses ancient objects discovered at the most important archaeological sites in Crete: Knossos, Phaestos, Malia, Tylissos, Gortys, Agia Triada, Mohlos, Gournia and Zakros. Other periods of Cretan history are covered too including artifacts from the Greco-Roman and Neolithic periods.

We don’t have much experience of eateries in Heraklion Town, so we would appreciate your views on the matter.

Let us know of your experience eating in Heraklion by submitting your own restaurant review. Click here to fill in some simple details, and let us know what you think (we'll include it on the website).

We've heard some good reports about the eateries in and around Lion's Square, where there are lots of souvlaki shops.

Try Thraka especially. The brothers who own this (and at least 2 others) are very dedicated and provide a sumptuous alternative to the traditional Gyros.

The psomaki me souvlaki or a psomaki me gyro is a small loaf with souvlaki or gyros. They scrape out the bread from the middle to make some room, and after toasting it, fill it with pork, tomatoes, onions, chips, and (Alison's favourite) a dash of Greek Yoghurt. Delicious!

Vegetarians wanting to avoid the meat can go two doors down where you can buy a spinach pie, cheese pie - or a crepe.

It's not surprising that many visitors want to sample the delicious wines of Crete and to visit the key wineries in the region. Here are a few places you might want to try.

The Boutari winery and wine tasting hall is inside an estate vineyard called Fantaxometocho just 8km outside Heraklion.

Located on the right side of the road close to the exit from the Peza village is the Milliarakis Winery of Minos Wines. Wine tasting combined with an exhibition of old winery machines (pumps, bottling machines), as well as of an old traditional stone-made winepress makes for an interesting and informative day out.

The Peza Agricultural Union is located on either side of the main road passing through the upland valley in the heart of the Peza appellation district a couple of kilometres past the Peza village. Free entry to the exhibition centre which is open from 9.00am - 3.00 pm Monday to Saturday includes wine tasting of 3 different kinds of wine along with traditional meze with olive oil. 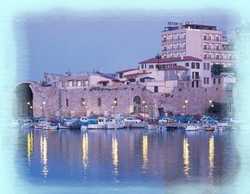 The nightlife in Crete is understandably vibrant as Heraklion is the capital city of Crete. Lots of ultra modern bars, cocktail bars and nightclubs can be found so you can dance the night away. The culture is Greek rather than UK/USA here in Heraklion (unlike Malia), with dance music and Greek pop the most populars themes.

As you might expect, there's a wide range of accommodation options in Crete's Capital from luxury hotels to basic apartments.

The Atlantis Hotel is a good example of a hotel at the upper end of the market. It is located in a quiet central area, near the Archeological Museum, and close to the commercial center of Town. It has some of the best views of the sea and the harbour.

It has 160 rooms including an executive and even a presidential suite!

The Megaron Luxury Hotel boast it's "the only luxury hotel in the city", and who are we to argue! With 5 stars it is planted in the heart of the shopping district, again within walking distance of the Archaelogical and Historical museums and overlooking the old harbour.

"The hotel's unique architecture and modern interior achieve a subtle blend of luxury and intimacy not easily forgotten".

The City Hotel Castello is less up-up-market but still a good choice for location, amenities and price.

It's located conveniently or the airport, port, and close to the shopping streets of Heraklion.