Knossos – the most important and best known site of Minoan Civilization 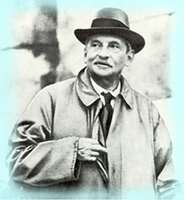 Knossos (sometimes spelt Knosos) is an ancient site. Occupied since 7000 BC by people's of the Neolithic Period.

The term Minoan was coined by Sir Arthur Evans, a (British born) archaeologist, who excavated the site here at Knossos.

He named the people after the mythic King Minos. Knossos is the most important and most fascinating Minoan legacy in the world.

The Minoan civilisation is largely a mystery to scholars, and all we have learned about their culture is derived from the legacy they have left us: their beautiful art, architecture, and artifacts.

Knossos is one of three major Minoan sites, the others being at Phaestos and Malia. 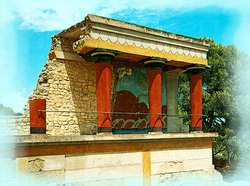 A RESTORED PART OF THE PALACE AT KNOSSOS

An interesting feature of this archaeological site is it's restoration.

Unlike most ancient sites, an attempt has been made to restore some monuments to what is believed to have been their original state.

The restorations were carried out by Arthur Evans. Criticism of this approach has been fended off by suggesting that such interventions were necessary to preserve the monuments as they became exposed.

It certainly does give a very good impression of what the monuments would have looked like and well worth a look. 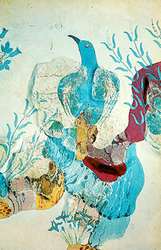 THE HOUSE OF FRESCOES, KNOSSOS

There are several monuments at Knossos:

The Palace of Knossos. Of all the Palaces this is the largest. With a central courtyard surrounded by 4 wings.

The Little Palace. A smaller palace west of the main

The Royal Villa. Thought to be the home of a religious aristocrat of the Minoan period or even a priest. It's north and east of the main palace.

House of the Frescoes. This is a smaller house with richly decorated frescoes on the walls.

Caravanserai. Thought to be a reception hall. It has painted walls and is equipped with baths, thought to be connected with healing.

The "Unexplored Mansion". This is located north and west of the main palace.

Temple Tomb. So called because it is thought that one of the last Kings of Knosses is buried here.

House of the High Priest. Lying about 300 m. south of the Caravanserai and connected to the Temple Tomb by a paved pathway.

Villa of Dionysos. So called because of its fabulous mosaic depicting the Greek God. Thought to be a private house. 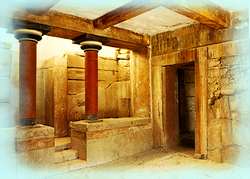 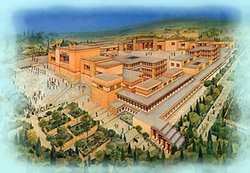 Zeus, the greatest of all the Gods, gave birth to a son called Minos. It was Minos who became King of Knossos, Crete, and the Aegean.

It happened that King Minos gave birth to a son, Androgeus. Because of his strength and altheticism, Androgeus was sent to represent Crete in the Athenian Games.

His success at the games drew jealousy from the King of Athens who had Androgeus murdered. 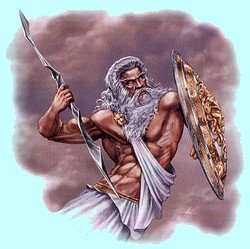 THE KING OF THE GODS

Zeus was a bit fed up about this and so dispatched a fleet to Athens seeking revenge for the murder of his son. He conquered the Greek city but instead of razing it to the ground he ordered that Athens send to Crete 7 men and 7 virgin women every year, to be sacrificed to the Minotaur who dwelt in the Labyrinth.

The King of Athens was upset with this arrangement and wanted to put an end to it. It happened that his son, Theseus, volunteered to be one of the 7 young men, so he could kill the fearsome Minotaur.

To signal the success of his mission, his father would see white sails on his ship replacing the black sails.

Now, Minos' daughter Ariadne happened to fall in love with Theseus, and so with her help, he was successful in killing the bull-like beast.

However, he was so excited with having found his true love and killing the Minotaur that he forgot to change the sails on his ship. When the King of Athens saw the black sails approaching, he killed himself in his grief, by throwing himself off the cliff into the sea.

There are a few free admission days to watch out for:

You can catch a bus from Heraklion bus station (no.2) – it has "Knossos" on the front. By car, from the National Road follow signs to Knossos, on Route 99.