The Island of Spinalonga, Setting of a Best Seller...

The island of Spinalonga (also known as Kalydon) is located in East Crete off the coast of mainland Crete close to the villages of Elounda and Plaka in the Lasithi region.

The award winning and best selling book The Island by Victoria Hislop is set on the island and shares the fictional story of a family's ties to the former leper colony.

The story takes place during Spinalonga's final years as a leper colony and blends together fictional characters and documented facts about the history and daily life of the island. 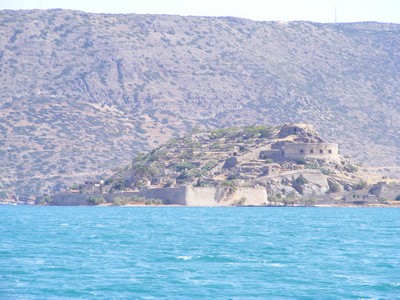 The island of Spinalonga is an ancient fortress first built to protect ancient Olous (Elounda), once one of the most important towns on Crete, especially between 3000-900 BC. Later in the 16th century the Venetians built a fortress on Spinalonga over the ruins of an acropolis and it was considered impregnable.

This did not stop the pirate Barbarossa (now featured in the Hollywood movie the Pirates of the Caribbean) attempting to storm the fortress. The Venetians, however, kept control of the island until the Ottoman Empire took possession of it in 1715 and created a Turkish village with around a thousand inhabitants.

After Crete gained its independence, the Turks were required to leave the Island of Crete. But the Turks living on Spinalonga were reluctant to leave. It is said that the Greek government turned the island into a leper colony to scare away the remaining Turks.

So from 1903 until 1957 the island became a leper colony. Approximately 400 people inhabited the island over the half-century.

Leprosy, the oldest known disease to man, was one of the most feared and reviled diseases. Although largely associated with unsightly deformities affecting the face and limbs, it can in fact take years for visible signs to manifest themselves.

Leprosy is an ancient disease, but although curable, is still prevalent today, especially in regions of India and Africa. Often sufferers have very mild symptoms that are almost undetectable. For example, a slight numbness in some areas of the body, or slight changes of pigmentation on the skin. Suffers of the disease in the past would attempt to hide their condition for fear of being outcast and sent away from their families and communities to a leper colony.

The biblical notion of treating a leper as “unclean” and being clear evidence of past sins, was kept alive for many centuries. Not until the 19th century when it was found that leprosy, just like other diseases, was caused by a bacteria, did attitudes begin to slowly change.

People from Crete and other parts of Greece suffering from leprosy were sent to live out their days on this small island. At that time leprosy was still seen as a highly contagious and incurable disease and sufferers were outcasts. 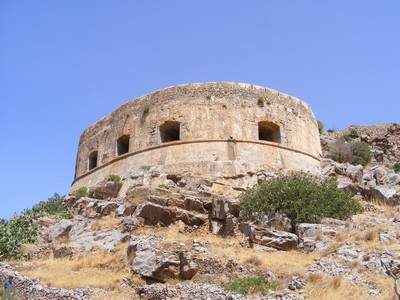 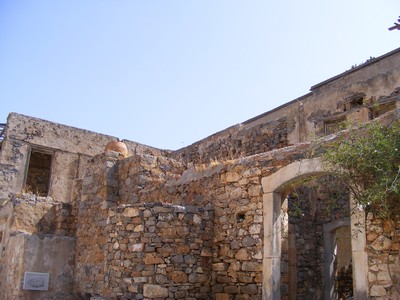 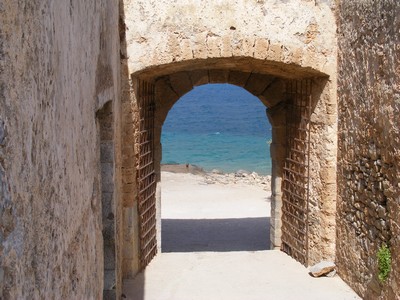 However, the banished inhabitants sent to Spinalonga did not dwell on the doom and gloom of their illness. Instead they formed a thriving community.

They had a busy shopping street, cafes, a cinema, a church, houses, allotments and of course a hospital.

Along with the inevitable deaths on the island, there were also births and marriages during the half-century of its history as a leper colony.

Eventually effective treatment was discovered for leprosy and by the end of the 1950s the need for a leper colony on the island was gone forever. The government closed the colony, and the island has remained uninhabited ever since.

The Island of Spinalonga today

Today, the intriguing and atmospheric Island of Spinalonga attracts a great many visitors and is easily one of the main tourist attractions in Crete. The Island of Spinalonga can be accessed easily from the village of Elounda and also from the town of Agios Nikolaos. Tourist boats depart from both places on a daily basis during the summer season.

If you choose to take a tour boat to the island you will disembark and go through a tunnel known as Dante's Gate. This was so named because the people with leprosy did not know their fate once they arrived. A guided tour will take you through the entrance where you will find part of a street that has been reconstructed to give an idea of how it would have looked when it was home to the people with leprosy.

You can feel the sense of a community the island must have had as you’ll find a little street with houses on either side and a little church. You can almost picture the people going about their daily business. Sad reminders though that this was a leper colony and not just a quaint Cretan village can be found at the graveyard where literally hundreds of people were buried. And up on the hill is the old hospital where so many were treated. From this vantage point you get a great view across to the mainland.

There's a small museum tracing the history of the island back through the centuries too.

So for anyone visiting the beautiful Greek Island of Crete Spinalonga is truly a ‘must see’ destination.