After a hectic summer of love, fun, and raising a family, the swallows of Kalyves gather together and look to the south... 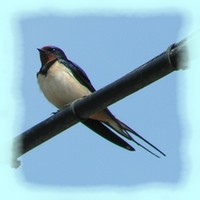 One of the most wonderful things about living in Crete is how close you are to Nature - flowers, birds, and farm animals roaming free-range on the farms that are everywhere.

In Kalyves, we are lucky to have large colonies of barn swallows (hirundo rustica) sharing the resort in the summer. The main street is full of these small sweet birds as they nest under the eaves of the small shop fronts. You can almost reach up and touch their nests, made up of tiny nodules of dried mud packed together in a small half-cup shape and stuck in a suitable corner. 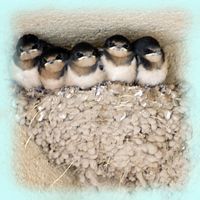 As the summer progresses, you will often see rows of cheeky beaks peering out from the small gap between the nest and the roof or eave of the building.

In the evenings, the air is full of twittering as the parents glide elegantly down the main road, darting this way and that, changing direction in an instant, as they feed on insects on the wing.

Dinner at the Kalyves Beach Hotel, sitting outside next to the river, is a real summer delight. The swallows constantly skim the surface of the water, drinking and feeding off the insects that gather in the cooler air above the flowing river.

At this time of the year, the hard work is over, and when walking in the evening along the sea front, you will often see clouds of twittering swallows as they feed together in huge flocks, darting over the sea and wheeling and turning back to roost in the village. 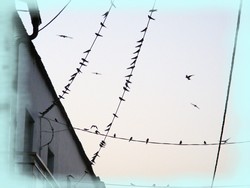 The hard work is over, and the birds are enjoying themselves, and at the same time, getting used to each other on the wing, because it is in these large groups that they will make the 3,000 mile journey to Africa.

It will be a sad day when they go. They won't all make it of course, but enough will, to make the return journey back to the place they were born, here in Kalyves.

Last night they were gathering on the wires that cross the sky above the main street of the village. We try to get down to see them as often as possible.

We want to make sure we get the chance to say Bon Voyage!

Greece didn't do too well in the Olympics...

This news report appeared in the Kathimerini newspaper this week:

"Only one week has passed since the Olympics closing ceremony in Beijing, so any attempt to evaluate the long-term impact of Greece’s performance at the summer Games would be somewhat premature.

Nevertheless, few would disagree that there is good reason to be concerned about the future of Greek sports. The grim conclusion derives not only from Greece’s poor medal haul, the sad doping scandals involving Greek athletes or the fear that young kids will be left without worthy role models.

The concern, rather, centers on the behavior of a number of Greece’s senior sports officials, since they are the ones who shape developments in the field on multiple levels.

One can see the unfettered ambition driving these people who do not hesitate to put their personal well-being ahead of the progress of the country; people who fail to take into consideration the impact of their private squabbles; people who shy away from adversity; and above all, people who have displayed a chronic inability to propose any measure that could help bring sports to every school and to every neighborhood where the Olympic champions of tomorrow await inspiration and support."

They're not doing too well in the football either...

Again in the Kathimerini newspaper:

PAO find out fixtures, Aris and AEK dumped out of UEFA Cup

"Panathinaikos will face Olympiakos’s conquerors Anorthosis Famagusta as well as Jose Mourinho’s Inter Milan and German side Werder Bremen in the group stages of the Champions League, following yesterday’s draw.

Anorthosis became the first Cypriot side to make this stage of the competition after a 1-0 defeat against the Greek champion on Wednesday night. The result meant the Cypriots won their two-legged tie 3-1 on aggregate.

Olympiakos will compete in the UEFA Cup, where they will be Greece’s sole representatives after Aris and AEK crashed out of the tournament last night. Aris lost 2-0 (2-1 on aggregate) against Slaven Koprivnica of Croatia. AEK drew 2-2 with Omonia Nicosia in Cyprus but had lost the first leg in Athens 1-0."

This from the National News Website in Greece (ERT)

Water Scarcity at the Gate

"Water supplies in Greece have been seriously reduced, and should drought continues in autumn, Greece may come up against a grave threat, scientists have warned.

Athens, which represents 4% of the total water consumption, is supplied with water from Lakes Iliki and Mornos, whose water level is rather disappointing.

Therefore, radical measures have to be stepped up, while consumers should be more careful.

A survey carried out by the Agricultural University of Athens has suggested that the biggest water consumption takes place in farming, since 85% of the water supplies is used in irrigation."