The Fascinating People and Culture of Crete

Crete has a fascinating culture and it's people can boast an amazingly varied heritage of influence from advanced cultures and civilisations in the ancient world.

Crete itself is renowned for being the home of one of the earliest, if not the earliest, civilisations of the world. A civilisation named "Minoan" by the pioneer archaeologist Arthur Evans who unearthed the fabled Minoan Palace at Knossos.

So what has crafted this people and its land?

Crete has been the focus of attention for many civilisations over the centuries and the influence of conquering nations can be found in its culture, its buildings, its food, and even the look and appearance of its people.

Cretan history starts with the Minoan Civilisation, the first civilisation in Europe, which flourished from about 2700 to 1450 BC. The term Minoan was coined by Sir Arthur Evans, a British born archaeologist, who excavated the site at Knossos. He named the people after the mythic King Minos. The "Minoans" called themselves something different, but we don't know what.

After the decline of the Minoans, Crete was invaded by a series of conquerors starting with the Myceneans. Soon, the Dorians and then later the Romans invaded. When the Roman Empire declined, the Byzantines took their turn and it was at this time that Christianity was established.

The Arabs conquered Crete in the 8th century. The Byzantines took over again before they sold the Island to the Venetians in the early 13th century, who bestowed their influence until their surrender to the Turks in 1669.

The Turks ruled until 1898 after which Crete was placed under international administration. In 1913, Crete became Greek.

All these various influences have played an important part in moulding the people and culture of Crete. 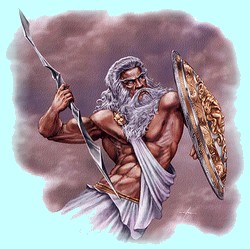 The word Myth is derived from the Greek mythos, which means "story". For the ancients they were a representation of the way people thought, and a means of explaining events and phenomena in their world.

Mythology was an important backdrop to Cretan, and indeed Greek, history.

Crete often features in Greek Mythology and indeed was the birthplace of Zeus, the King of the Gods. The mythical King Minos was said to have been King of all Crete and kept the fearsome Minotaur in his palace labyrinth.

Daedalos and Icarus reputedly took flight from the south coast Crete village of Agia Galini with their wings made from wax and feathers to escape from King Minos. But flying too close to the sun the wax melted and Icarus fell into the sea.

The tiny island of Gavdos, of the south coast of Crete, is said to be where the nymph Calypso lived. She entranced Odysseus, the King of Ithaca as he made his way home after the Battle of Troy. Odysseus and his ship mates loved the island so much they stayed for a full seven years.

The Cretan Minoan goddess Diktynna, known as Britomartis is said to have been born at Kaino amid the Samaria Gorge and White Mountains in western Crete.

King Minos, fell in love with Dyktynna and pursued her for a full nine months chasing her along the length of Crete. But Dyktynna wanted to remain a virgin and would not give in to Minos' attentions. He chased her to the edge of a cliff and being trapped, she threw herself off. The area of this desperate act is now known as Dyktynna.

The Geography of Crete

Religion is an important influence too, as demonstrated by their strict adherence to religious holidays and festivals. 95% of the population of Crete are baptised into the Greek Orthodox faith. The Church plays a major role in the lives of most Cretans.

The usual births, marriages and deaths are marked by the Church in the form of baptisms, marriage ceremonies and funerals. But there are so many other important dates in the church calendar that are literally religiously followed.

Saints feast days are honoured and celebrated by the whole village. The many memorial services held after someone dies are as well, if not better attended, than the funeral. Baptisms and weddings are attended by the whole village. The Annunciation, the Assumption, Whit Sunday and the Epiphany all hold special religious significance for the Cretans and attendance at church is expected.

There is no bigger celebration than that of Easter. It far outshines even Christmas here on Crete. Leading up to Easter is Carnival time and Lent. This is known as Apokries

Even birthdays are less important to an individual than their respective Name Day.

Click the link to see video footage and pictures of the religious ceremony of the Blessing of the Waters known as Agiasmos.

Talking of "days", the 28th of October is Oxi Day (pronounced "Oshy"). Oxi is Greek for "No" and this is the day that the Greeks commemorate their resounding defiance against Mussolini's ultimatum to surrender, as the Italian Army stood poised on the Albanian border for an invasion of the Greek mainland in 1940.